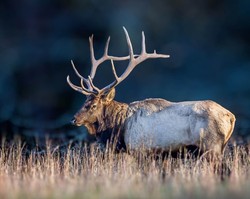 HUNTERS: For a bull to be legal according to CDOW he must have four points on one side OR a brow tine that is at least 5 inches.  This is to help mitigate the risk of a hunter shooting a yearling bull (Spike). 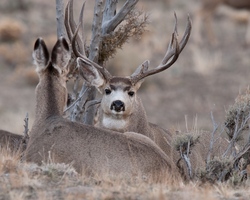 Mule Deer (Odocoileus hemionus)
Icons of the American West, Mule Deer, like the high altitude deserts that Colorado has to offer.  Mule Deer are brownish-gray in color, have large mule-like ears, black foreheads (referred to as a mask), a white rump with a small white tail with a black tip on it.  They range in size between 130 to 280 pounds. Mule deer have a 310 degree range of vision and can spot the slightest predator movement from up to 600 meters away, although they do have trouble spotting motionless forms. A male mule deer’s antlers will have a main beam on either side growing out and up, forking once, then forking again. A full grown male (buck) will have four or more points on either side, not including the brow tine. 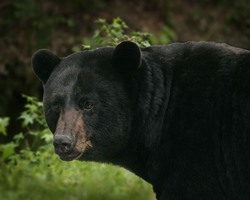 Black Bears (Ursus americanus)
Black bears are solitary animals that roam large territories ranging from 15 to 80 square miles. Although they are referred to as Black Bears, they can range in color from bluish, brown, cinnamon, or even the very uncommon white. Their diet consist of grasses, roots, berries, insects, fish, and other small mammals. Black bears physiology and behaviors change in August as they enter a period of hyperphagia (feeding frenzy).  During this period the black bear's diet changes from plants to nuts and more fat and carbohydrate filled foods that provide stores for their upcoming hibernation. While in this fall feeding frenzy, black bears will increase their foraging activity from 2 to 4 hours daily up to 20 hours a day.

HUNTERS: In an effort to monitor the number of bears killed, each bear's age and gender, ALL hunter-killed black bears must have their pelts and heads inspected by the Colorado Parks and Wildlife within 5 days of the kill.

Cougar/Mountain Lion (Felis concolor)
These large cats range from 120 to 180 pounds and can measure up to eight feet long. Colorado is home to many of these amazing creatures, although the exact number is unknown due to this wildcat’s elusive nature. Mountain Lions usually prey on deer, though they are also known for eating young/weak elk and many other small mammals. It is believed that each full grown lion kills one deer (or equal kill) each week. Mountain Lions prefer to hunt in the early hours of dawn and the late hours of dusk.

HUNTERS: It is illegal to obtain a license or hunt a mountain lion without having a mountain lion education certificate. This certificate can be obtained through the Colorado Parks and Wildlife (CPW). Mountain Lion hunters must check daily with local CPW to ensure their hunting unit is open. Hunters must contact CPW within 48 hours of your lion kill and give your name, CID number, license number, date and unit of the kill, and gender of the lion. 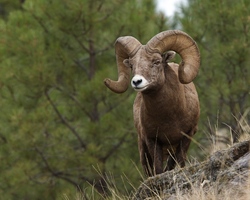 Rocky Mountain Big Horn Sheep (Ovis canadensis)
Relatives of goats, these amazing creatures are best known for the large, curled horns that the males (rams) grow. These horns can weigh up to 30 pounds; more than all of the bones in their body put together. Female bighorn sheep (ewes) grow horns as well, but they are smaller than a ram’s. Bighorn sheep move easily on high rocky ledges and through rugged terrain due to their split hooves and their rough hoof bottoms. 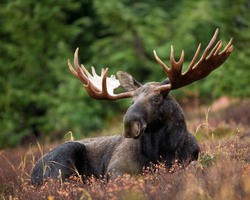 Shiras Moose (Alces alces shirasi)
The Shiras Moose is Colorado’s largest big game animal with an adult weighing between 800 to 1,200 pounds.  A male (bull) can stand up to six fee at the shoulder. These majestic creatures are easily identified by their thick, dark brown coat that looks black at a distance and a flap of skin that hangs from their throat, called a bell. The Bull Moose grows palmated antlers each year. These antlers are bowl shaped with points around the edge and can have a spread of up to five feet. Moose have long legs that enable them to maneuver through thick willow, brush, tundra, and snow packed areas. Moose mainly eat willows, but they also eat grass, plants, and many different types of tree bark. The Shiras Moose is believed to have migrated into Colorado on its own around 20 years ago and currently have a state-wide population of around 1,000 animals.

HUNTERS: A legal bull is defined as having antlers at least five inches long.  An antlerless moose is defined as female or young male with antlers smaller than 5 inches. All moose must be inspected by CPW within five business days of kill. The antlerless head must be present or the antlers attached to the head must be present at time of inspection. There is a mandatory tooth inspection at this time as well.
Inquire about a hunt